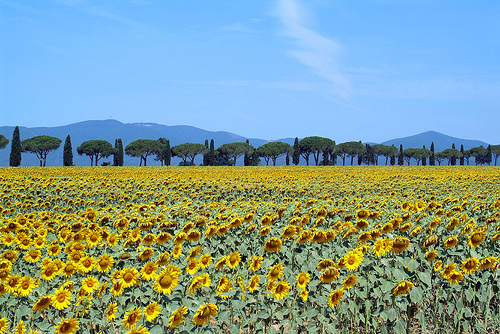 Tuscany is characterized by a hilly territory, fascinating landscapes and magnificent medieval villages, so it is one of the most interesting Italian regions for people who like cycle tourism. The link between this region and cycling is very strong; in fact it will host the 2013 UCI (International Cycling Union) Road World Championships.
There are several itineries for those who want to explore Tuscany by bike, so it is not easy to choose one of them.
However, having to start from somewhere, a place I would like to talk about is the Val d’Elsa, situated in a “strategic” location, between the cities of Siena, Florence and Volterra.

Here there are many different cycling routes that you can afford, more or less long and challenging; so you have only to choose one, even by considering your fitness level.
There are many reasons why the Val d’Elsa is a great destination for cycle tourists: the area is hilly, so that cycling activities could be more challenging but absolutely not boring. The landscape is particularly pleasant thanks to the presence of olive groves and vineyards (do not forget that in this part of Tuscany they produce different kinds of wine, for example the Vernaccia in San Gimignano), and also of sunflowers, that colour these lands during the summer.

Who will decide to get on a bike to go and visit the Val d’Elsa, has to consider not only its natural wonders; in fact, this area is dotted with numerous medieval villages, that are all worth visiting.
Nevertheless I would like to focus on two of them: Colle Val d’Elsa and San Gimignano. 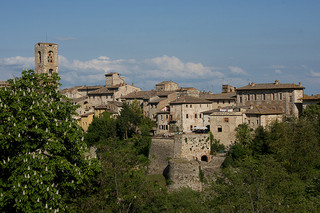 Colle Val d’Elsa is divided into two parts: the most recent of them is called Colle Bassa (low hill), while the oldest one is known as Colle Alta (high hill), in which the centre is Piazza Arnolfo, where the commercial activities and shops are more concentrated. The old town is worth a visit in itself, but it is very interesting also for its crystal industry, which evolved from the glass industry (that was established here in the fourteenth century). The crystal business is so important that Colle Val d’Elsa, for centuries known as the Italian Bohemia, is now considered as the City of Crystal. 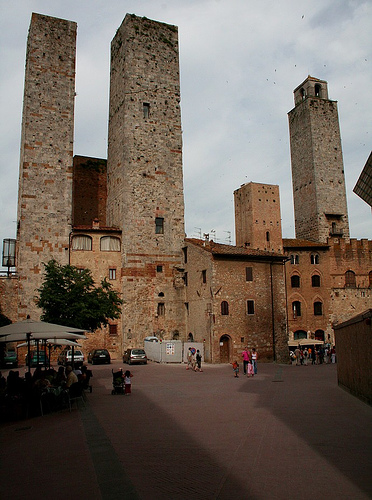 Another very attractive centre in this part of Tuscany, whose visit you cannot miss if you are here, is San Gimignano, located near Siena. The medieval village, which is on the UNESCO’s World Heritage list, is famous for many reasons, including its 15 towers (once they were 72), the production of Vernaccia and that of saffron. In San Gimignano there is also a beautiful Cathedral, built in the twelfth century, as well as numerous museums, churches and palaces.
The charm of the Val d’Elsa is therefore indisputable, so if you love bicycling, I suggest you set off as soon as possible and try out the various possible routes, perhaps staying in a hotel in San Gimignano, in order to enjoy the village and take the opportunity to discover several of the cycling routes here.